South Shields has a direct Metro route (yellow line) to and from Newcastle city centre and we would recommend this method as the quickest. Journey time to/from Newcastle upon Tyne city centre is approximately 20 minutes. Whilst South Shields is at the eastern end of the yellow Metro line Newcastle city centre encompasses Central, Monument and Haymarket Metro stations. The yellow line to/from South Shields stops at Central, Monument and Haymarket stations before continuing north to Jesmond and the coast in a loop before terminating at St James' Metro station (St James' Park, the home of Newcastle United Football Club).

If you wish to travel between our guest house in South Shields and St James' Park then you can either disembark at Monument Metro station and walk 250m to the stadium or change lines at Monument Metro station. We do not recommend you travel around the whole yellow line loop to reach St James' Park from South Shields as this would take over an hour to do.

A map of the Tyne & Wear Metro system is shown above. South Shields is on the right of the image, south of the river Tyne and our yellow line terminates at St. James'. Journey time to/from Newcastle city centre is approximately 20 minutes. Further information including ticket prices and how to use the Metro can be found on this page of our website: Tyne and Wear Metro. 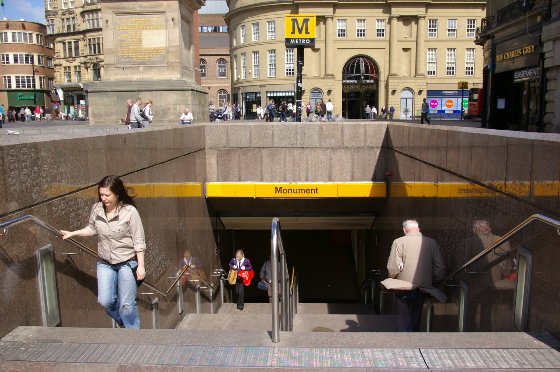 Monument Metro station's Grey Street exit can be seen in the image above with the base of Grey's Monument and the Blackett Street entrance to Monument Mall in the background.

If you are visiting Newcastle upon Tyne's Theatre Royal on Grey Street then Monument Metro station is the best station to disembark at via the Grey Street exit at the foot of Grey's Monument where you will see the theatre directly in front of you on the left hand side of the street (as shown in the image below)... 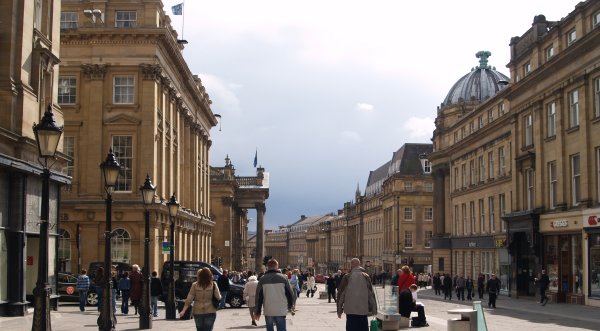 Both Trinity House and the Trinity Maritime Centre at 31 Broad Chare, Newcastle upon Tyne, NE1 3DQ are closest to Central Station Metro station (we recommend leaving the Metro station via the Grainger Street exit).

We hope the map below assists you in navigating Newcastle upon Tyne city centre both on foot and by Tyne and Wear Metro...